This is the second part in my series about my talk at DroidKaigi 2019. You can find the rest of them below:

I would dedicate this whole post to share about my proposal about this topic: "ExoPlayer in RecyclerView". The presentation I used at DroidKaigi is below:

First, let's start by investigating our challenges. I would like to start from the fullscreen playback experience.

In fact, the experience including user open a dedicated playback screen for one item from the list, I would like to call it Single Player instead of Fullscreen.

Let's think about this experience. How many form factor of Single Player we have? Of course, it depends on how you design your App, but roughly thinking, there are 3 forms we can use to represent the Single Player: 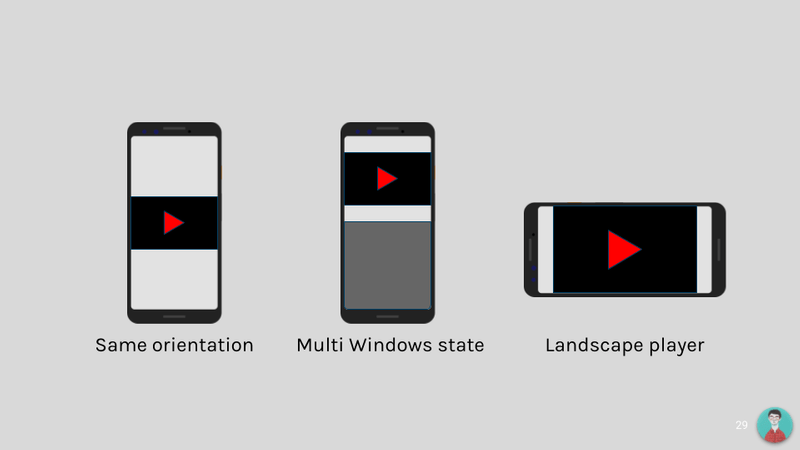 There may be more, for example Picture-In-Picture mode. But implement it is not trivial, I would like to spend other post for it.

Opening Single Player and back has the following challenges in term of UX:

Let's take an example of Facebook app to see how the experience works in practice: 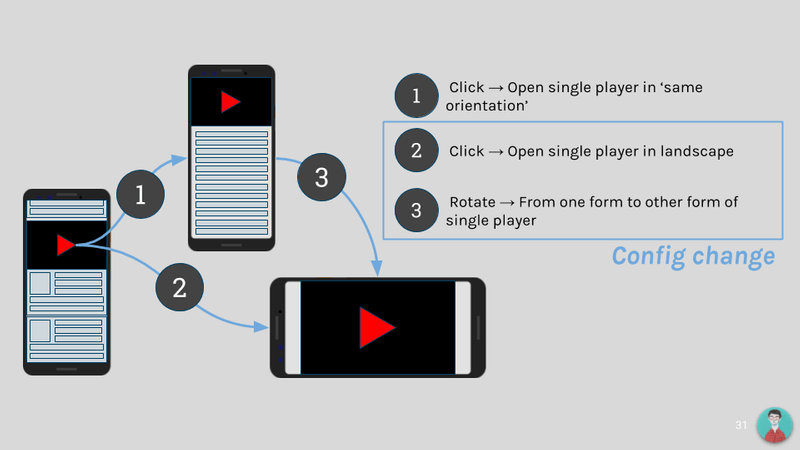 We can see that in 2. and 3., there is chance for configuration change.

Above, we discussed about the form factor of a Single Player. Below is common flow to open one:

Of course, there may be more, but it will end up asking us the same questions:

So to summarize, our implementation should ends up answering the following questions:

Next, let me talk about my Proposal, starting from the principles I would follow to design it:

To accomplish those principles, here is how I make it: (1) design a mechanism where an instance of our "playback" could survive across many changes, including configuration changes (the recreation of an Activity), as well as lifecycle change (from one Activity to another, or from a Fragment to another). (2) design a resource management mechanism such that, it would retain just enough amount of resource (eg: ExoPlayer instances). The definition of 'enough amount' would vary, below is mine:

So, in this approach, the more videos you have on screen, the less performant the App will be.

One good point of my approach is that, it doesn't force the client to follow this principle always, but it allows for customization that just need to meet some certain requirements.

Below is my explanation for (1): a mechanism to keep the playback continuity.

First, we need some components to make it happens:

These components form a team and work together:

The inspiration behind this model is the blow line fro ExoPlayer

I just say that Playable is in a team managed by Manager, but in fact, this guy is like us, developers. We stay in this project and then move to other project on demand. Playable is what we use to create what I called Playback Continuity before. To demonstrate this, let's move to components' lifespan and a figure below:

With these components, the way we keep the playback continuity is as follow: by switching the Target of a Playable, we do not need to recreate it or reprepare it. So says our current Target A is in the list inside Fragment A, when we open single player for it in Fragment B (and the playback surface is Target B), we rebind the Playable from Target A to Target B. Done!

But wait, replacing Fragments will involve a lot of changes, including Fragment destroying and creating. So how our Playable survices those changes? Let move to cross-lifecycles.

Cross-lifecycles is the behavior when something happens in a lifecycle and keeps happening in another lifecycle started by current one. For example: a Video playing inside Activity, if this App using new Activity for single player, the Video should be playing after opening single player Activity from current one.

There are many patterns of cross-lifecycles:

In my approach, keeping Playable survive through cross-lifecycle is equal to keeping playback continuity. We investigate cross-lifecycles patterns below, and ses how our components work with them?

As you can see from the figure: once config change happens, the Activity will tell it to client via the call isChangingConfigurations. Catching that value, we will know if we should keep our Playables survive or release them. In case of config change, if after the creation, the Activity still use the Playable, we keep it in Global cache, and rebind it after the recreation. That way, our Playale will just keep playing.

There is no isChangingConfigurations signal in this case. Instead, we follow the lifecycle callback of each. Says from Activity A, the client calls startActivity to start single player in Activity B. The figure below shows how we handle this case:

Yeah it is. In this scenario: after calling startActivity from Activity A to open Activity B, first Activity B will be created, then started, after that Activity will be stopped and destroyed. So in Activity B's onStart or onCreate, it just needs to take the Playable from Activity A, this Playable will be unchanged, and our playback will keep playing continously.

3. Replacing Fragment by a Fragment

Consider the case: client open single player in Fragment B, using Activity's FragmentManager to replace current Fragment A with it. Because Fragment represents the same lifecycle sequence with Activity, so we hope the same timeline above will be true for Fragment.

By default, it is not. Fragment A will be destroyed first before the creation of Fragment B. During the gap between a destruction and a creation, we have no clue to rely on, to keep our Playable alive.

But, we are lucky. Latest support Fragment library brings the method setReorderingAllowed to live, which allow Fragment transaction to happen in the same way Activities' lifecycle. So we have the same methodology to keep Playable alive across FragmentTransaction: 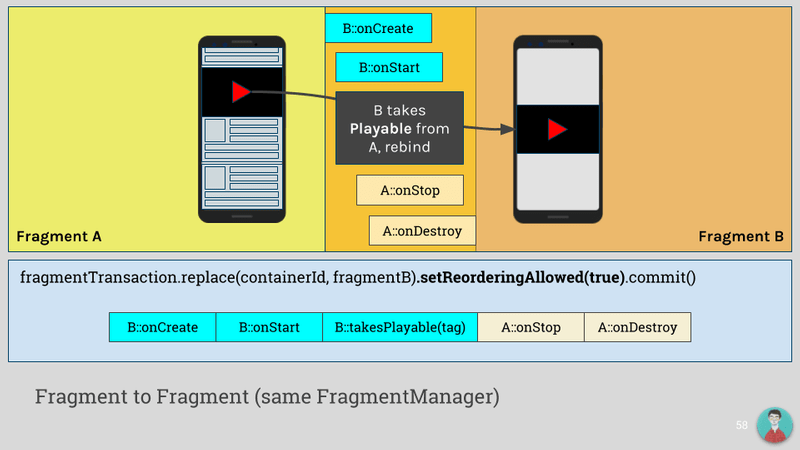 There is no destruction in this scenario. We can simple take the Playable to play inside the DialogFragment.

I will explain about taking the Playable in detail later.

Combining those scenarios we discussed above, we could keep a Playable alive through various lifecycle transition, which in turns, keep our playback continuity:

As shown above, by understanding the cross-lifecycles behavior, and use it correctly, we can keep the playback play continuously, across various transition, including configuration changes.

In next part, I would like to show how my approach manage the playback resource, make it work together with the components I define in this part, and finally how we would combine all of them in our final goal: to make ExoPlayer works in RecyclerView with ease.